Joint Statement of the Trilateral Meeting of the Trade Ministers of the United States, European Union, and Japan

The Ministers advanced discussions on their shared objective to address non market-oriented policies and practices of third countries that lead to severe overcapacity, create unfair competitive conditions for their workers and businesses, hinder the development and use of innovative technologies, and undermine the proper functioning of international trade and discussed various tools needed to deal with these problems.

They reiterated their concerns, reviewed ongoing work, and agreed to deepen their cooperation in all areas covered by the Ministerial Statements issued in Washington DC, New York, and Paris, including nonmarket policies and practices, market-oriented conditions, forced technology transfer policies and practices, industrial subsidies and state-owned enterprises, WTO reform, and digital trade and e-commerce.

In today’s meeting, the Ministers discussed in particular:

On industrial subsidies, Ministers welcomed the progress made in discussions on text-based work on increasing transparency, identifying harmful subsidies that merit stricter treatment and ensuring that appropriate benchmarks can be used. Ministers instructed their staff to continue efforts to finalize trilateral text-based work on these and other issues in order to engage with other key WTO Members with the aim of initiating negotiations on stronger disciplines on industrial subsidies and state-owned enterprises.  They also agreed to increase outreach to key WTO Members on the need to strengthen industrial subsidies rules to address market distortions. They also welcomed the close cooperation they have developed in the context of WTO disputes addressing non-market distortions and subsidies through public bodies.

In the area of forced technology transfers, Ministers confirmed their agreement to cooperate on enforcement, on the development of new rules, on investment review for national security purposes, on export controls and further take stock of this cooperation.

Ministers confirmed ongoing trilateral cooperation on investment review mechanisms and welcomed deepening cooperation among the relevant authorities, including through the sharing of best practices on risk analysis and mitigation methods.

On the reform of the WTO, the three partners submitted a revised transparency and notification proposal to the Council for Trade in Goods in April with other co-sponsors, and the Ministers agreed to intensify engagement with other trading partners to advance this proposal in a manner that increased WTO Member compliance with existing WTO notification obligations aiming at an agreement at the earliest possible timing.  They confirmed their agreement to work towards strengthening the regular committees’ activities.  The Ministers welcomed the ongoing discussion in the WTO on addressing special and differential treatment in current and future WTO negotiations.  They reiterated their call on advanced WTO Members claiming developing country status to undertake full commitments in ongoing and future WTO negotiations and applauded that some WTO Members have indicated their intent to do so.

The Ministers call on the International Working Group on Export Credits to accelerate its work with a view to reach consensus on the new international export finance disciplines by 2020 in order to level the playing field for export credits.

Ministers welcomed the Joint Statement on Electronic Commerce issued in Davos on 25 January 2019 and confirmed their commitment to seek to achieve a high standard agreement with the participation of as many WTO Members as possible.

The Ministers look forward to further cooperation for the G20 Ministerial Meeting on Trade and the Digital Economy and the Global Forum on Steel Excess Capacity under the Japanese G20 Presidency. 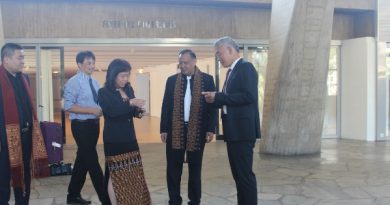